I know some folk take issue with the "decoy" ring, but this thing comes in handy. Lord knows I always try MY BEST to never verbally assault a black man, because they get it from er'body, even though some of them have earned the wrath of this pre-Jesus tongue with their shenanigans, I always bite it. This is the politest way to respond to the variation of their "are you available" line. I simply hold up my left hand, smile, slide into my car and ride out. (‪#‎BoyBye) And I didn't even have to open my mouth to tell a lie. Plus, it's a character meter. If they back off right away then at the LEAST their moral compass is trying to point due North, even though he just bit his lip as he eyed you up and down as if you were a piece of meat like ain't nobody fed him at all this month. (‪#‎StopIt I'm wearing sweats, didn't even make an effort today, it's too early in the morning for this foolery) And if he doesn't respect it, you know you dodged a bullet anyway. I know there are some who will debate that I could miss "the one" with this tactic, but trust me, that's not a necessary concern you need to have, so miss me with that logic. 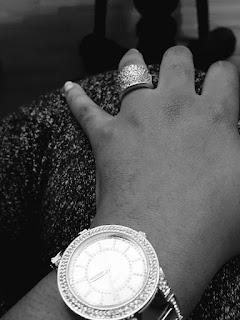 To my beautiful black men out there, listen... It's time for y'all to upgrade your approach, especially when it's a grown woman. Read the body language - walking away is not an opportunity to chase her. Take the polite smile and gracious exit for what it is - a kind "no, I'm not interested." I know this current generation got this whole dating game out of whack with their low standards and acceptance of any foolishness offered, but that doesn't translate well to adult interactions. Let's up these approaches, add some class, take out the crass and actually use your verbs, nouns and adjectives to communicate and not your disrespectful eyes. Some of us actually prefer an adult conversation to the immediate lustful stare and objectification. Exercise some self-control, it's a very telling sign when you don't. Even if you don't walk away with her number you will have restored/confirmed her hope in her black brothers. Be encouraged. Selah.