They say hindsight is 20/20.  If that's the case, then spiritual hindsight has to be 20/15.  I wrote this line in one of my books, "Color Me Blind:"  "You won’t always understand while you’re in the storm, but when you’re out of it, God’s hand will reveal itself to you more clearly than anything you have ever seen."

My writing comes by the leading of the Holy Spirit, and I couldn't have written truer words.  As 2017 is coming to a close, I realized how challenging this year has been.  I mean I've dealt with the types of shenanigans that I never expected to hit my doorstep.  And I'm just talking about GMME world events, not actual world events, which as I'm sure you know has been just... Disturbing to say the least, but God remains sovereign.  I keep coming back to what I learned about when God speaks and yesterday it woke me up, so I'm going to share what I've learned on my journey of faith.

The Bible says that God's ways and thoughts are not ours and that they are higher than our own. So consider this, when He speaks, He speaks at the level of His ways and thoughts and not our understanding. It is up to us to seek Him for insight and revelation into what He is revealing to us.  In the recent past, I learned one of the most painful lessons ever.  As I often say, it's REAL in these spiritual streets.  I was impatient and decided that the opportunity in front of me was the promise I had been waiting for.  This was all based on MY understanding of what God had previously told me.  Even when I began to see little things that nagged me that did not line up with what I know God told/showed me, I ignored it.  I was trying to make a square peg fit in a round hole.  I was determined to make this situation fit God's promise to me.  It turned out to be one of those Father moments, I can show you better than I can tell you. 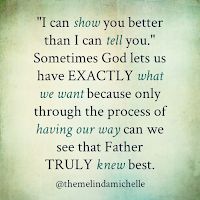 Trust me when I tell you, that is NOT the place you want to be in when it comes to God.  After the situation came crumbling down, I threw my temper tantrum of being mad at God because He let this happen to me.  I received a phone call from a friend and God used her to politely rebuke the mess out of me.  She told me that I already knew that situation was counterfeit, but I chose not to accept it. BOOM!  I had no recourse to defend myself. So I went to my war room aka prayer closet and God began to go slap off on me.  I took what He said and ran with it based on what I thought He meant without getting further insight and revelation.  I was talking trash, but God You said this and You said that. His clap-back was, yes, but I didn't say it in reference to that.

Sometimes, we get so comfortable in our relationship with God, we assume that how He worked the last time is going to be how He works this time.  YOU CANNOT PUT GOD IN  A BOX - HE'S TOO BIG!  God is a God of process.  He always lays out the promise in steps.  Once the first step is accomplished, He gives us the next.  In our impatience, we rush things or go in the wrong direction because we THINK we know how God is going to do something. Let me tell you, He is the ULTIMATE King of Plot Twists. You can't figure Him out, so don't assume you know His next move. Let be God be God.

Many, many moons ago, I had a pastor tell me this guy I was SOOOOOOOOO in love with, was the one.  Never mind that when we met, I had just bought my house and he had just received another job and was moving to another state.  (First Clue) Because this "prophecy" lined up with MY will, I was here for it.

Wait... pause, let me drop a little spiritual common sense real quick. Even though I believed that he was "the one" I never told him that "God said, he was the one."  We need to be careful how we throw in God said or the Holy Spirit said or the SPIRIT said (What spirit is that?). Often times people use that to manipulate or guilt people into doing things and I'm just gon call a spade a spade - that's witchcraft, plain and simple!  Even back when I was young in my faith, I had enough sense that if God could tell me, He would tell him and bring us together on one accord at the appointed time.

So, back to the story.  Six months in, he said he just wanted to be friends. I was devastated, BUT my faith was on high, not really, I was just young and foolish, but I digress.  So maybe a year later that SAME pastor had a word for me at prayer.  (This was the real word from God, not the flesh of man speaking into my life)  It was, "God said, when the brook dries up, move on." I'm like huh, what?! A body of water... bruh... what you talkin' bout?! Everybody around me was like that has to be about ol' boy. I said it can't be, it's a body of water PLUS God said, he's the one.  Chile, I'm doing all this fasting and praying while this negro is living his life, dating whoever and got me in the background as "the friend."  About three years into our back and forth, we hung out for my birthday, it was epic.  Had the best time ever.  I just KNEW my prayers had finally been answered and he was going to see what he had been missing.  When I got back, he went back to the same old shenanigans!  I was HOT!  I said I didn't have the tolerance for this crap anymore.  I was done.  God brought that word back to me.  It didn't make any sense still, but this time, the thought occurred to me there was a reason He said it.  I decided to look up the word brook.  According to Merriam Webster, this is the second definition of the word, the verb:

brook (transitive verb)
to stand for: tolerate ~ he would brook no interference with his plans

My mind was BLOWN!  First of all, who knew "brook" had such a meaning. Second of all, God sent word to get me out of this foolishness and save me from unnecessary heartache A LONG TIME AGO.  Third, I really tried myself and could NOT blame God. He did His part.  I had just said I didn't have anymore tolerance for this crap BUT the truth is, I had long ago lost my tolerance for it, I just didn't acknowledge it because I didn't want to let go of MY will. It was never God's will AND He gave me that word to free me from the lie of man.  Not only that, but used the same pastor to do it to get him straight too for prophelying. After God sent my word of freedom, it was on me to accept it.  I just used my faith as an excuse to justify my stubbornness of not letting go of my will, when everything around me was telling me, this isn't God.   Now I know you're thinking, why didn't God just say what He meant.  Well, He did.  His Word already told us His ways and thoughts are higher. It's not His fault if we choose to use our understanding over HIS understanding. His word says: Trust in the Lord with all thine heart; and lean not unto thine own understanding. In all thy ways acknowledge him, and he shall direct thy paths.

Those are some shining examples that stay at the forefront of my mind when I hear from God and how I proceed next.  Patience has become my new best friend.  I know she's a drag and no one REALLY likes her, but she's the real deal and you better not only get to know her, but embrace her in this walk otherwise you're setting yourself up for a lifetime of disappointments.  I am going to leave you with some things I've learned and prayerfully they'll keep you in the will of God and not led astray.

1) When God speaks, He's referring to what's to come, not what has been. Don't try to GO BACK and make it fit for something in the past, especially when you get impatient because it hasn't showed up yet. Don't get into the "well maybe He meant this" cycle. Just wait, it's coming.  Instead look ahead for His words to come to pass.  His word will not return to Him void.  God spoke so clearly to me in January of 2016.  What I heard only made sense in parts and I had to link it to past events in order for it to make the most sense, but it still didn't quite fit.  I was so desperate for this promise to be right now, I was going to make it work instead of letting God be God.  I did not receive insight and revelation until October of 2016. When He reminded me of the promise in October after many things transpired that year, everything was plain as day for me to see.  It's now November of 2017 and while I now have insight and revelation, I'm still waiting on parts of it to manifest. Let patience have her perfect work.

2) When God speaks that doesn't automatically make it His Will. God deals in absolutes, if you ask Him something and He answers, He's going to tell you the truth because He knows the future. Ex: You ask God, "Will I get this job?"  He replies, "Yes."  However, His yes could be contingent on the fact that He knows they will offer you the job, but that doesn't make this job His will for you.  The follow up question to his "yes" should be, "Is this your will for me?" Then go from there.

3) The timing of when God chooses to speak is not necessarily in reference to what you are going through/dealing with at the moment.  Ex: I have had God give me specific and direct instructions about my husband while dating a counterfeit.  Don't assume you know based on what's going around you.  His timing is His own and up to His choosing and there's nothing to be done about it except to govern yourself accordingly.

Always seek for insight and revelation so that you can avoid delays, disappointments, heartache, unnecessary spiritual battles AND their residue.  We are constantly trying to bring God down to our level when we should be ascending to His.

Melinda Michelle
Links to Get At Me
Posted by GMME at 11:50 AM